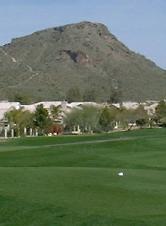 PHOENIX - The beauty of golf in Phoenix lies all around the Pointe Golf Club at Lookout Mountain. Lush fairways lead to firm greens set amidst the mountainous terrain of the Valley, where quails and coyotes still like to roam the course.

»
Related Articles
If you go

Yet nature's beast is slowing swallowing up the borders of the course, replacing the natural landscape with residential homes, apartments and even a McDonald's.

It's been quite a change in the dozen years since Bill Johnston designed the par-72 championship course in the Sonoran Desert.

"There used to be more desert on every hole," admitted Mitch Ross, the head pro at the public golf course which services guests from two Pointe Hilton resorts connected to the course - one at Tapatio Cliffs, the other at Squaw Peak.

To keep up with the changing times, the Pointe Golf Club adapts its course by moving some tee boxes and bunkers around to accommodate the booming residential business in the area. Don't worry, though, there's still plenty of desert left to make you curse any shots that veer from the course, which is in wonderful condition: "I'm not sure it's ever been in better shape," Ross said.

Within the Pointe Golf Club's new confines is a well-kept course of 6,617 yards (6,002 from the regular tees; 4,557 from the ladies) that features long par-3s and short par-5s throughout an array of doglegs, hills, bunkers and elevation changes.

After checking in the pro shop - where rates range from $159 during the high season to as low as $35 during summer afternoons - and a lengthy ride to the driving range, putting green and first tee, you begin your round with a traditional flavor on the first six holes.

While the layout changes later in the round, these holes provide a good feel for the generous landing area and highlight the danger of hitting into the desert shrub which rarely yields a playable lie. A thin layer of rough, a splattering of trees, and strategically located bunkers protect the desirable areas of the course while you shoot to small greens that hold their true line.

The two longest holes of its kind are found early: No. 2, a 562 par-5 (487 from the middle) that doesn't play that long if you're able to cut the corner on the dogleg right and avoid the fairway bunker; and the 248-yard (190 middle) par-3 sixth hole, that leaves any shots even slightly right in the desert or heavy shrub around the green.

The seventh hole begins the climb up and down the mountain with a par-5 that looks reachable. But the second shot is usually a long one from a downhill lie through a fairway that nearly disappears the closer you get to the elevated green.

No. 9, is only 125 yards from the back of the back tee box, but it's one of the most difficult shots on the course, and the hole that has benefited the most from the changes on the course. While the green's slope has been reduced greatly, it's still strong enough to pull any shots short of the hole back off the green. A large bunker, or a downhill pitch, awaits any balls hit too far.

It's far better than its earlier days, when even well-struck shots on the green, most likely spun back off.

At the turn, high above the course, there are beautiful views of the city, the course and the homes in every direction. One hundred and seventy-five feet below you is the tenth fairway, and any shot left is hard to find, let alone play out of the desert.

It's time now to put your thinking caps on with many of the remaining holes requiring you to choose between pulling out the driver or laying back with an iron. 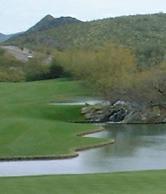 No. 13, a short par-4, is probably best played with a fairway wood since it's not driveable at 353 yards. A bunker is waiting to collect tee shots, but the next hole is up for debate.

The yardage book suggests laying up on the 344-yard par-4 with an elevated tee box to a green slightly offset to the left. But Ross believes you're better off firing away with the driver on No. 14, as long as it carries the desert scrub and avoids the condos that line the left side of the hole since there's a bunker straight away to catch overcautious irons. After all the hole is called "Gunslinger," and there's a sign on the tee box that warns golfers to be aware of the group in front of them if they decide to charge the green.

No. 15 allows you to hit big off the tee, but avoid the lake on the left side that runs all the way up to the green and makes you think about your second shot on the 492-yard par-5.

The final three holes leave the homes behind, as the Phoenix Mountain Preserve prevents residents from moving in, although be aware of hikers as the cart paths intersect with trails through the area.

Line up your final drive up with the Tapatio Cliffs resort straight ahead on the 512-yard par-5 18th (491 from the middle). How you plan your next one is up to you, as a lake guards the right half of the green and curls around to capture any shots that roll too far beyond the putting surface. A large bunker protects the left side for lay-up shots and another pair flank the green. However you attack No. 18, it's a beautiful way to finish.

19th holes: Once you've decided how to play the closing hole, your options aren't over yet. The Pointe offers eight restaurants amongst the two hotels, including the popular - and golfer convenient - Pointe in Tyme Grill & Tavern located just beside the pro shop at the top of the hill.

The eateries offer up everything from the romantic Different Pointe of View, which annually receives accolades for its breath-taking views of the city and its acclaimed wine cellar to authentic Mexican to casual American food. Cool refreshments are served wherever you end up. 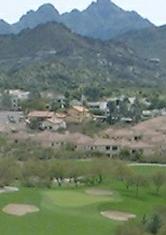 More decisions: For those traveling, there are more options to choose before and after your round of golf. The Pointe offers two resorts that service the course, Tapatio Cliffs and Squaw Peak.

Both offer spacious two-room suites and each resort has its own water-themed park, with lagoon style-pools, lazy river for tubing, a 10-foot waterfall and even a 130-foot slide. Packages that include golf at the Pointe Golf Club or any of more than 30 local courses are available through both resorts.

Swing time: The Pointe Golf Club is the home of the Golf Academy, hosted by Bobby Eldridge. Packages offer one to three-day extensive golf lessons on the driving range and golf course. Lessons in a group setting are available for travelers and local commuters as well.

Golfed out? For the non-golfing guest, there are numerous options, from going on a horseback ride at the near-by stables (which are located between the pro shop and actual golf course at the base of the Phoenix Mountain Preserves), to hikes through the extensive mountain trails, to tennis. There's always the more relaxing visit to the spa for a massage, facial, or manicure.

Stay and Play: Finally, for those who are not quite up to par with the $159 green fees, the Pointe Resorts offer packages to stay in the resort and play the course during the off-peak season from May 28 through August 30 for as little as $104 - a great rate even for locals.